In the middle of all this mayhem in New Orleans (yes, I'm talking about Super Bowl) we actually were allowed to have our Mardi Gras!  It is fabulous, as usual, with great parades, beautiful floats, King Cake,  Mardi Gras Indians, flambeaux and pure happiness.  Notice that I did not mention beads anywhere in the above.  My friend, Joy, and I were our usual skeleton selves.  Every year we make a new costume and march with the Bywater Bone Boys, an diverse bunch of disorganized people, loosely based on the real Bone Gangs who run through the Treme neighborhood at dawn.  We come out a little bit later, we at least let the sun come up.  Then we wander throughout the streets of the Bywater, throwing little smoke bombs and banging on garbage cans.  It is our chance to be juvenile delinquents for a few hours.  We join up with the St. Ann Parade, led by a band, and march into the French Quarter.  It is sublime.  It is an inexplicable feeling to be encircled by so many people, most of whom you don't personally know, surrounding you with love and confetti.  I wish everyone could experience that for just once in their lives.  Happy Mardi Gras! 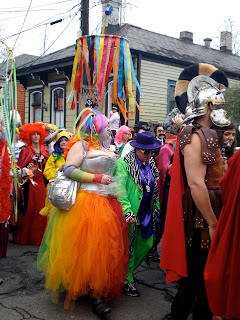 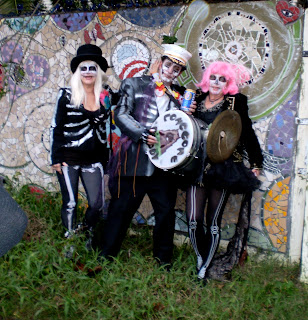 Posted by Southern Impressions at 3:24 PM