I WANT TO HOLD YOUR HAND


That was me standing on a folding chair, screaming my lungs out, tears rolling down my cheeks...
it was 1963 and I was 13 years old, old enough to go to my very first concert by myself and it was
the BEATLES!  I guess my mom was cooler than I thought back then because she not only allowed
me to go but bought me the ticket as well!   "Meet The Beatles" was also the first record album that I bought.  I was out of my mind with joy at that concert that day back in Detroit and I have remained the most loyal of Beatle fans over the years. I have followed and loved their music separately, too, and since then I have seen Paul McCartney in many of his different reinventions and have travelled to other cities to go to his concerts. This weekend's concert in Memphis was probably the best of all, though, not only because I could actually hear the music this time (no screaming) but because Paul's talent has only improved with age.  He is a perfectionist and his over- 70 age status has not diminished his talent any little bit.  There are not many performers of that age who could be on stage at his energy level for almost 3 hours and you can really see how much he enjoys performing,  bringing happiness to his
audience.  It was sublime.  If you had told my 13-year-old self that I would someday, in the far 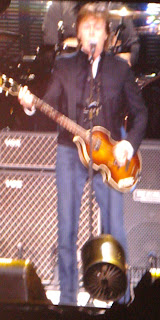 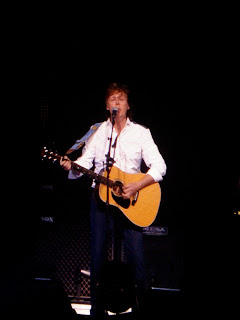 distant
future,  get to see Paul McCartney on stage singing Beatle songs, I certainly would have laughed. (Mainly because I didn't believe that either of us could possibly get this old)!
Posted by Southern Impressions at 7:19 AM