For all of you tourists who love to ride our streetcars with wild abandon and no specific destination, today was not the day to ride the rails.  The early morning commute was halted when a large truck decided to
"beat" the streetcar.  Guess he didn't realize that those old streetcar brakes do not stop on a dime.  Crunch.
Can you say "alternate route"?
Then on the return  ride home from the French Quarter, it seems that the line lost power so they sent us a lovely bus for the pick-up but during our ride Uptown we were stuck for 20 minutes while an unscheduled parade of Mardi Gras floats meandered cross town....a true consternation to all of us because Mardi Gras parades are not due to begin for a few weeks.  After finally finding adequate power in the streetcar line we made the transportation transfer safely and were again arrested by the development of a movie being filmed  on St. Charles.  Yes, right in the middle of the streetcar tracks. 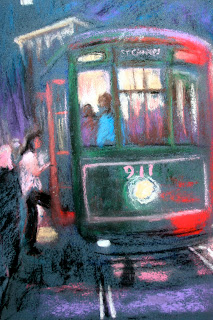 I suppose we didn't look authentic enough for their film.  At least you could say that we never have an ordinary day here in New Orleans.  The rest of the world must be kind of boring!
Glad to be home, though.
Posted by Southern Impressions at 6:08 PM No comments: 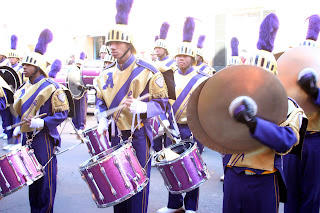 It was a beautiful. sunny day for a parade in the French Quarter today and the reason for it was to celebrate the Sugar Bowl start-up.  There were horses and carriages, bead-throwing, umbrellas and the best marching band in the country...the St. Aug Marching 100.  It is so refreshing to see so many teen-agers so dedicated to music and their school.  They are well disciplined and talented.  Of course, this is really just practice for
them because we are all gearing up for Mardi Gras here in New Orleans and St. Aug will be marching many miles in the weeks to come.
Posted by Southern Impressions at 5:41 PM 1 comment: