So, that about brings you all up to date on me.  Doesn't seem like it could actually be a whole year but I guess it is.  Lots of other stuff happened also, family illnesses, dramas, etc. but I am not one to post or try to even remember those things so why should I bother you with them?
After painting every spare moment that I could get for the entire winter months, I finally had my first Spring show, the Bayou City Art Festival in Houston, Texas.  It went well and I met a lot of nice, new customers whom I now consider to be my new friends.  I also met a lot of nice artists there.  I always do.  I don't have any photos from Houston but my booth shot looks about the same anywhere I set it
up (except that the paintings are always all new) so my new Jazz Fest shot will have to suffice.  We just wrapped it up yesterday.  It was a strange one this year because of the extreme weather.  It is usually beastly hot by now in New Orleans.  That is normal.  That is what we expect.  But this year it rained and rained, the wind blew and blew, the Fairgrounds  (where we hold Jazz Fest) became a vast mud pit that never dried out. and then it turned cold.  It was like summer in Canada.  The temps went down into the 40's and people were wearing coats and shrimp boots.  The thing about Jazz Fest, though, is that you can't stop people from having a good time and there is nowhere else I'd rather be!
Here's me in my booth in the Louisiana Marketplace area of Jazz Fest, 1st weekend. 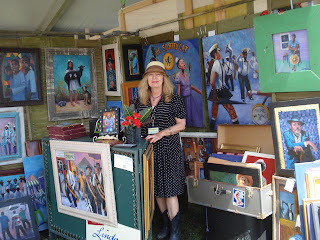 Posted by Southern Impressions at 3:36 PM