If you thought we'd let a chance to dress up and party pass us by, man, you'd be dead wrong!!
We love Halloween in New Orleans and we're all about the Day of the Dead stuff since many
of our ancestors came from places where this is taken very seriously indeed.  It's a holiday that is
second only to Mardi Gras and as soon as October rolls around people start spooking around in
their "bones" long before the exact date.  Many houses, especially Uptown, get a Halloween make-
over with scary decorations and bone-chilling skeleton inhabitants move in for the month.  Their
human counterparts also begin appearing all over town  Our famous cemeteries should be hopping 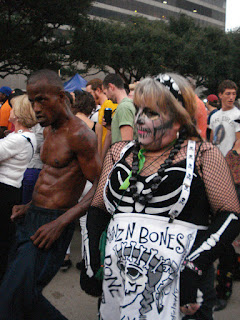 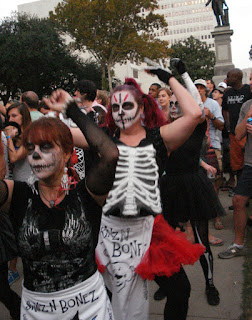 tonight.  Go out into the night....if you dare!
Posted by Southern Impressions at 10:40 AM No comments: 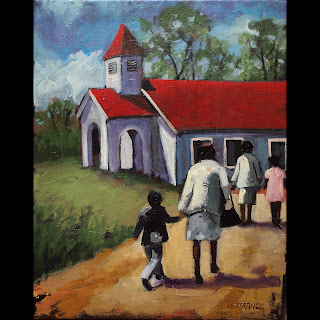 One of the more interesting aspects of living in one of New Orleans' oldest neighborhoods is the rich,
culture soaked history all around us.  The Black Pearl is just off of St. Charles Avenue in the Uptown
Riverbend section just next to Carrollton.  The whole map is dotted with very old, multi-denominational
churches, some that date back to just after the Civil War.
One such church is right around the corner from my house on Millaudon Street.  It is the Baptist church
where Mahalia Jackson sang in the choir as a child.  Mount Moriah Baptist Church, though it looks like it probably has had a face-lift not so long ago,  its' history goes far back along with the impact that Mahalia helped make  as she introduced Gospel music throughout the world. She was the first Gospel
singer featured at New York's Carnegie Hall and later at the Newport Jazz Festival.  She helped bring
Gospel out of the black churches and showcase it in concert halls around the world, bringing with it the
spirit of New Orleans as well.
Mahalia Jackson would have  been 100 years old this week.
Posted by Southern Impressions at 10:18 AM No comments:

Another One Under the Belt

Wow, we rolled in last night ahead of schedule by some miracle.  Everything went off without a hitch
(which is somewhat another miracle in itself).  Not only was I set up (in my little white tent) to show
my artwork but my significant other, Rusty, worked the music tent a few feet away from me.  The weather was gorgeous, sales were good and we met gobs of really nice people who also love the blues.  My favorite group was Homemade Jamz, a band of young kids from Mississippi.  They are all siblings and
the youngest sister is their powerful drummer.   Nice kids, too.  Kenny Wayne Shepherd and Tab Benoit
made their own kind of jams the night before when they took the stage together and rocked loudly, running 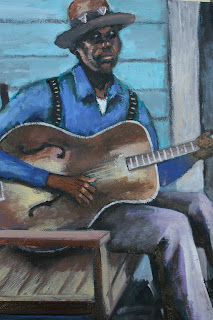 an extra hour overtime.  I guess they were having a good time, too.
Posted by Southern Impressions at 8:30 AM No comments:

Well, the weekend got off to a great start here in New Orleans with the Blues Festival.  It's my sixth year to be included in this local festival that is produced by the New Orleans Jazz & Heritage Foundation.  The weather couldn't be more perfect and there is a great line-up of blues music scheduled for the whole weekend.  Of course, I have my tent set-up on the grounds in the artist village and we all have some nice 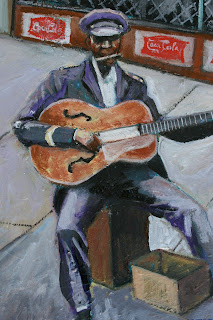 work to show this year.  This festival keeps growing and getting better every year.  The Louisiana Music Factory is there, also, and many of the musicians come over to their tent after their performance and sign cds and chat with the fans.  I have met some really great artists that way over the years.
Posted by Southern Impressions at 4:28 AM No comments: 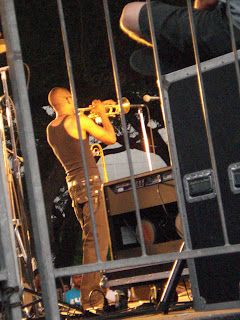 Are we ever proud of  native son, Troy Andrews, aka Trombone Shorty.  He's all grown up now and
is doing great.  We always knew he was a promising musician, song-writer and performer but he has
blossomed into a national star!  Last night he took the stage at Lafayette Square with his cracker-jack
band and blew the doors off of the square!  He did a few songs from his new album, For True, which
I already have, and then he did a few songs from his last cd, Backatown.  Anyone who thinks that New
Orleans is not still a great music town better come and see what we have to offer.
Posted by Southern Impressions at 9:23 AM No comments:

Wednesday in the Square 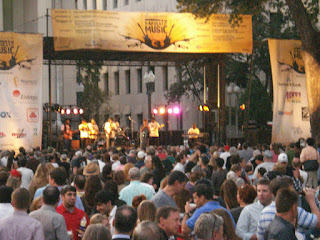 In New Orleans we celebrate "hump day" with an after work party in Lafayette Square.  It's a free concert series with great local music.  Food and drink purchases put money into a local food bank.  Last night we got to hear Irma Thomas, Soul Queen of New Orleans, do her stuff.  Did I mention?... the weather was perfect, too.
Posted by Southern Impressions at 12:01 AM 1 comment:

Ok, so maybe I'm a slacker but today we had such beautiful weather here in New Orleans that I couldn't stay cooped up in my studio  all day so I hopped on the St. Charles streetcar and took a ride downtown.

Here is the abandoned painting that I left on my easel.  What to do?  Hmmmm.
Posted by Southern Impressions at 5:17 PM No comments:

Last night I participated in Art for Art's Sake, our annual mega-gallery stroll which includes almost every
gallery on Julia Street in addition to most of the galleries up and down Magazine Street. Local bands and
DJ's lined the streets which were filled with huge crowds who came out for the kick off to the art season.
It was one of the first nippy nights in New Orleans.  We tend to hide from the heat just like everyone else.
I tried to get into Jean Bragg Gallery but it was too crowded so I went up the street to Arthur Roger's Gallery where John Waters was holding court.  You remember him from those infamous 70's and 80's
"trash flicks" like "Pink Flamingos", "Polyester" and "Hairspray".  Well, I knew about his films but who
knew he could paint?  He wore a full on dress suit with sneakers and was sporting his well-known pencil mustache.
Next I went over to the New Orleans School of Glass where the furnaces were raging and you could  not only watch them blow glass but they'd let you help them do it. 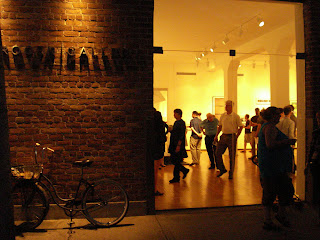 After that I took the shuttle up to Magazine Street and the party was in full-swing there. It was almost like trick or treat for adults as guests moved up and down the stairs from gallery to gallery, balancing drinks...and a good time was had by all.
Posted by Southern Impressions at 11:52 AM 1 comment:

Well, I've finally joined the Modern World.  My family has convinced me to share my life with the planet.
Living smack dab in the middle of New Orleans offers me the opportunity to be out and about with all
kinds of interesting people who do all manner of interesting and creative things.  This is the fodder from
which I collect the images that will eventually become my paintings.
Tonight is Art for Art's Sake in town so I'll be going down to Julia Street (where some of my paintings are
on exhibit) and then I'll probably end up at the museum for a party.  Sounds like fun.
Posted by Southern Impressions at 2:11 PM No comments: